THE SPENCER CANDELABRA. An important pair of George III Cast Neo Classical Two Light Candelabra made in London in 1782/83 by John Schofield. 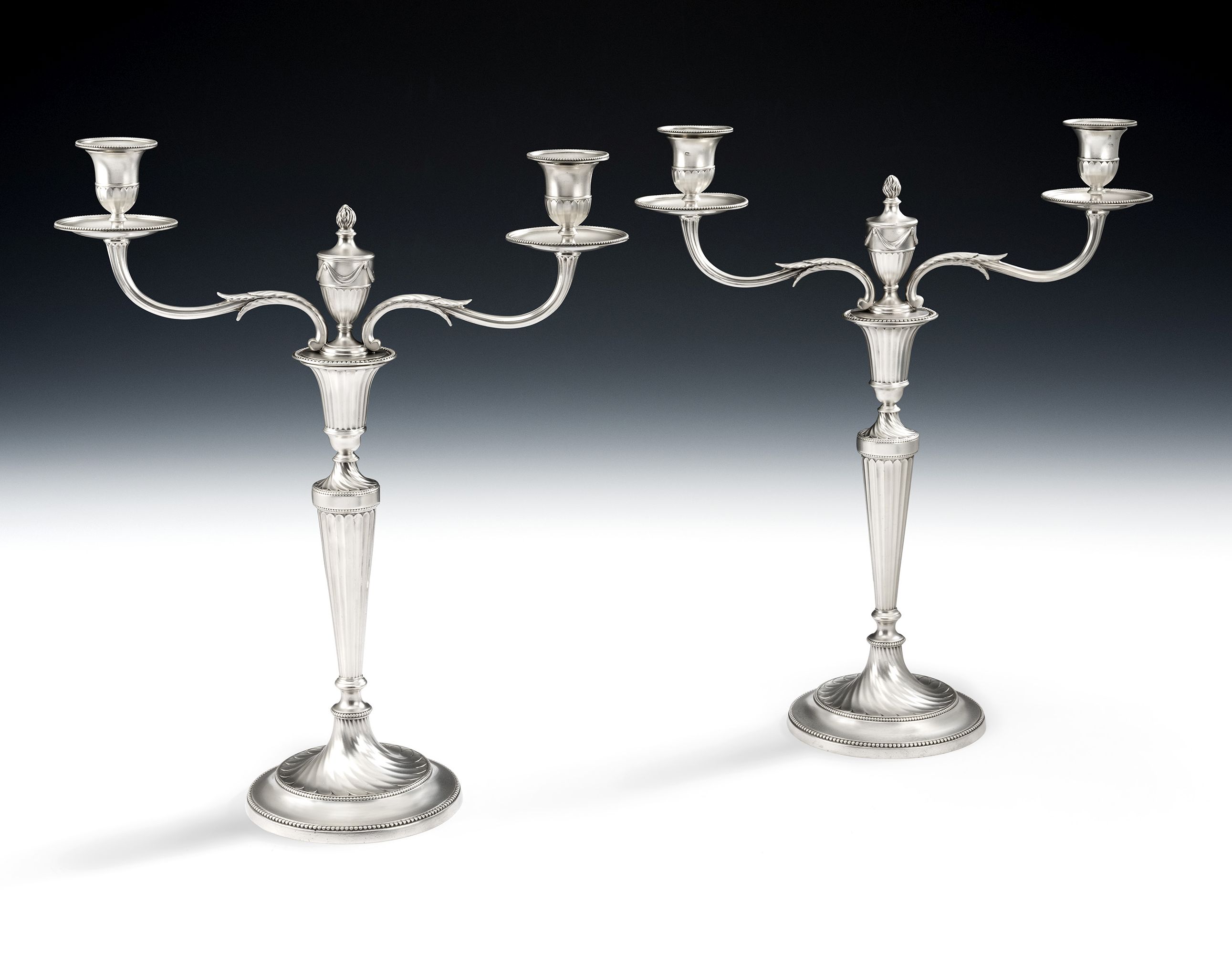 THE SPENCER CANDELABRA. An important pair of George III Cast Neo Classical Two Light Candelabra made in London in 1782/83 by John Schofield.

Each piece is cast and stands on a circular foot which is decorated with three bands of beading and beautiful swirl fluting.  The main, tapering, shaft is also decorated with vertical fluting and horizontal beaded bands.  Another band of swirl fluting rises to the tulip shaped candle socket and a detachable beaded nozzle.  The detachable branches have a central Neo Classical vase finial decorated with flat fluting and drapery swags and terminates in a writhen flame top.  The scroll branches are decorated with leaf capping and rise to a circular beaded drip pan, below the outer fluted candle sockets.  Each socket also has a detachable beaded nozzle.  If the branches are removed, they can be used as a pair of candlesticks.  Both are in excellent condition and are fully marked in the base and the branch sockets.  The underside of the drip pans are marked with the maker's mark and sterling mark and the outer candle sockets are marked with the sterling mark.  The nozzles are each marked with either the maker's mark or the sterling mark.  The pair are marked in no less than eighteen different places, which is quite remarkable.  The difference in the date of the main shaft and the branches, is just where the hallmarking year changed in May and the base was marked on the last day and the branches were marked on the first day of the new hallmarking year.

The Candlesticks are modelled in the Classical tradition and the use of flat fluting and beading was typical of the work of John Schofield.  He was one of the premier silversmiths working in London at this date and had workshops at 29, Bell Yard when these were made.  A.G. Grimwade, in his famous work "London Goldsmith's 1697-1837, Their Marks and Lives", emphasises that, "In his candlesticks and candelabra Schofield displays a high degree of elegant design executed with impeccable craftsmanship, which rivals at best the contemporary French goldsmith Henri Auguste.  It was perhaps the restrained taste of the period that prevented Schofield from displaying a virtuosity which might well have given hima reputation equal to De Lamerie or Storr.  No one could mount glass better, as is shown by his cruet in the Rotch Collection (Victoria & Albert Museum)".  He worked for Jeffreys, Jones and Gilbert, the then Royal Goldsmiths, and that he had considerable commissions from the King, George III, and his son, The Prince of Wales later George IV, when he furnishing his Carlton House residence on the Mall in London.

The Candelabra come from the Spencer Collection, most recently that of Raine, Countess Spencer.  The Countess was born on 9th September, 1929, the daughter of Alexander McCorquodale, an Army office and heir to an old printing fortune, and the romantic novelist and socialite, Dame Barbara Carland.  Her parents divorced in 1936.  In 1947, 18 year old Raine McCorquodale was launched as a Debutante into London high society.  She had a successful season, not only being named as debutante of the year, but also becoming engaged to the heir to an Earldom.  In July 1948 she married the Hon. Humphrey Legge, and they succeeded as Earl & Countess of Dartmouth in 1962.  The couple had four children, but were divorced in 1976.  She later married the 8th Earl Spencer, father of Diana Princess of Wales and became Chatelaine of the magnificent Althorp House, Northamptonshire, until his death in 1992.  Following Lady Diana Spencer's engagement to Prince Charles, they became globally known, travelling and entertaining on a lavish scale.  In later life Countess Spencer lived in London and enjoyed a very close relationship with her stepdaughter Diana, Princess of Wales, after her divorce from Prince Charles.  The Countess died in October, 2016.  Images are shown of the Earl and Countess Spencer at Althorp, Althorp House, Princess Diana & Countess Spencer and Countess Spencer's Dining Room, showing the candelabra on the table.

A fine George III Pepper Caster made in London in 1800 by John Robins.

An extremely rare George III Dish Wedge made in London in 1792 by Henry Chawner.

PAUL STORR. A very rare pair of George IV Grape Shears made in London in 1824.

An exceptionally rare George IV Indian Colonial Drinking Tankard made in Calcutta Circa 1830 by Hamilton & Company.

HESTER BATEMAN. A very fine George III Decanter Stand made in London in 1774 by Hester Bateman

An extremely fine pair of George III Entree Dishes made in London in 1800 by Richard Cooke.

PAUL STORR. An exceptional George III Jug on Lampstand made in London in 1807 by Paul Storr.