An important George III 22ct Gold Snuff Box. Made in London in 1798 by Cornelius Bland for the last warden of the Royal Mint, Sir Walter James 1st Baronet of Langley Park. 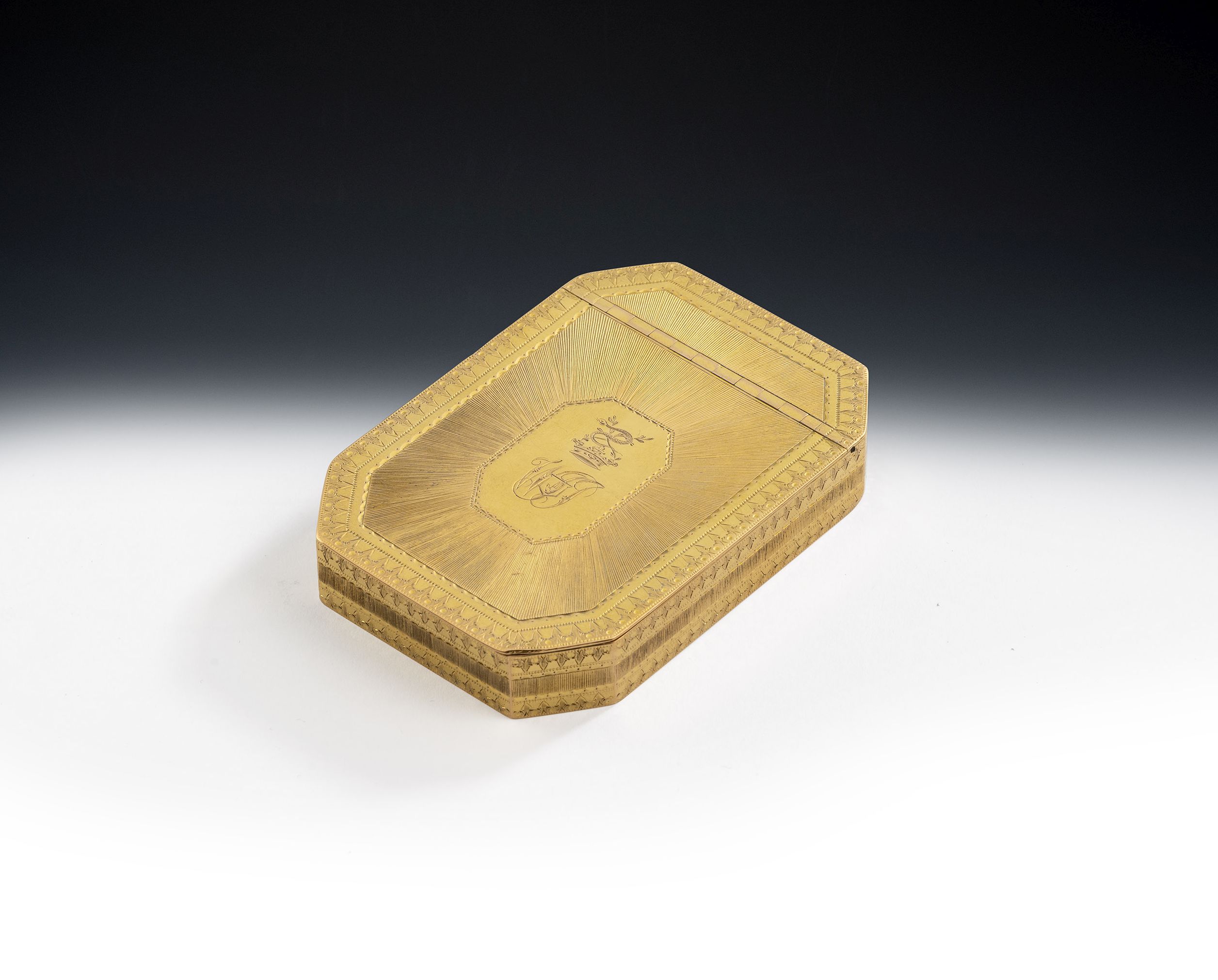 An important George III 22ct Gold Snuff Box. Made in London in 1798 by Cornelius Bland for the last warden of the Royal Mint, Sir Walter James 1st Baronet of Langley Park.

The Snuff Box is modelled in an unusual slender rectangular form with canted corners.  The quality of the engraved decoration is exceptional and the outer border and sides display an unusual band of palmettes and beads.  The cover and base displays a sunburst engraved panel, around a central plain cut cornered cartouche echoing the shape of the box.  The cartouche on the cover is engraved with a contemporary Crest above the initials WJJ, in script design, and the badge of a baronet.  The box is in quite excellent condition and displays crisp marks inside.  It has had very little use and still firmly snaps shut.  Earlier gold boxes were not marked, however they started to bear the hallmarks for 22ct gold towards the end of the century.

This is a particularly special box as it was made for Sir Walter James James, 1st Baronet, (1759-1829), of Langley Park, Berkshire.  An image of Langley Park and a pencil drawing of Sir Walter are shown.  Sir Walter married, in 1780, Lady Jane Pratt, daughter of the 1st Earl of Camden.  He died in 1829 and was succeeded by his grandson, also Sir Walter, who was later created Baron Northbourne.

Sir Walter held the important, and prestigious, position of Warden of the Mint.  He was infact the last Warden.  The Warden was a high ranking position at the Royal Mint in England from 1216-1829.  The Warden was responsible for a variety of minting procedures and acted as the immediate representative of the current monarch inside the mint.  The most illustrious holder of the office of Warden of the Mint was Isaac Newton.  After the death of the final Warden, Sir Walter James in 1829, the office was abolished, having existed for 613 years.

An important & beautiful George II Gold mounted Etui made in London circa 1745.

THE AESTHETIC MOVEMENT. A very rare and exceptionally fine silver and two colour gold Card Case made in Birmingham in 1885 by George Unite.

A very rare early George III Gold Mounted agate Needle or Bodkin case made, most probably in London, circa 1760

A fine George III Gold Mounted Snuff Box, most probably for a Lady. Made almost certainly in London circa 1790.