An early George III Neo Classical Drinks Salver, the design attributed to the Royal architect, Sir William Chambers. Made in London in 1771 by Ebenezer Coker. 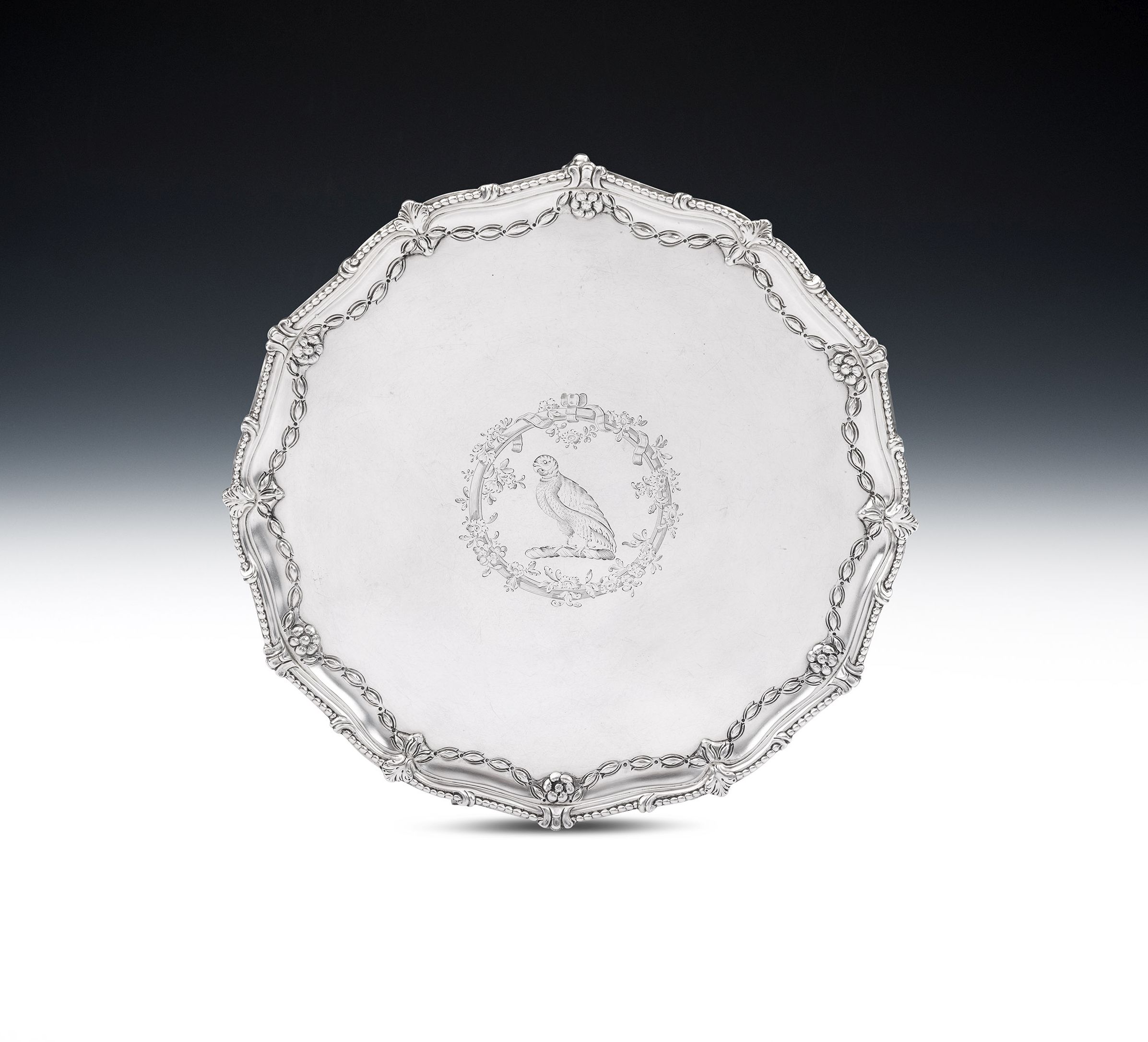 An early George III Neo Classical Drinks Salver, the design attributed to the Royal architect, Sir William Chambers. Made in London in 1771 by Ebenezer Coker.

This beautiful Drinks Salver stands on three cast claw and ball feet and displays a raised shaped border decorated with applied beading, interspersed with scrolls and foliate motifs.  The inner section of the border displays a raised band of blue bell swags and flower heads in bloom, typical of Sir William Chamber's designs.  The centre of the Salver displays a beautifully executed contemporary Crest, surrounded by a cartouche decorated with floral and foliate sprays, all tied with ribbons.  This piece is in quite excellent condition and is very well marked on the reverse.

The design was first used by the Royal architect, Sir William Chambers, based on drawings carried out by Chambers' pupil, John Yenn (1750-1821), now in the Victoria & Albert Museum.  The design was first used by Chambers in the 1760's after the 4th Duke of Marlborough employed the celebrated architect to undertake extensive alterations to Blenheim Palace, and Marlborough House in London.  The Duke also ordered a silver dinner service from Parker & Wakelin in this design attributed to Chambers, as well as the Fitzwilliam Silver Tureens, also designed by Chambers.  Stylistic similarities, as well as the use of heavy swags, can be seen in Chambers' model for a state coach for George III ( also in the V & A ).  Similarly, the festoons and paterae relate to Chambers' work on the East Gate at Blenheim.  Some pieces from the Marlborough Service still survive at Blenheim Palace and other known examples are a Tureen in the Leeds City Art Gallery.

This design is very seldom seen on salvers, as very few were made.  Ebenezer Coker was a specialist maker of Salvers, for some time in partnership with Thomas Hannam, and occupied workshops in Clerkenwell Close when this exceptional piece was made.

An important & exceptionally rare pair of George III Covered Barrel Tankards, possibly for twins, made in London in 1789 by William Bennett.

An extremely fine & unusual pair of George III Shell Dishes made in London in 1814 by William Elliott.

FREDERICK KANDLER. An unusual George III Salmon Dish made in London in 1776 by Frederick Kandler.

NEWCASTLE. A George III Sauceboat made in Newcastle in 1774 by John Langlands I.

PAUL STORR. A very rare pair of George IV Grape Shears made in London in 1824.

An exceptionally fine George III Entree Dish made in London in 1818 by Benjamin Smith.