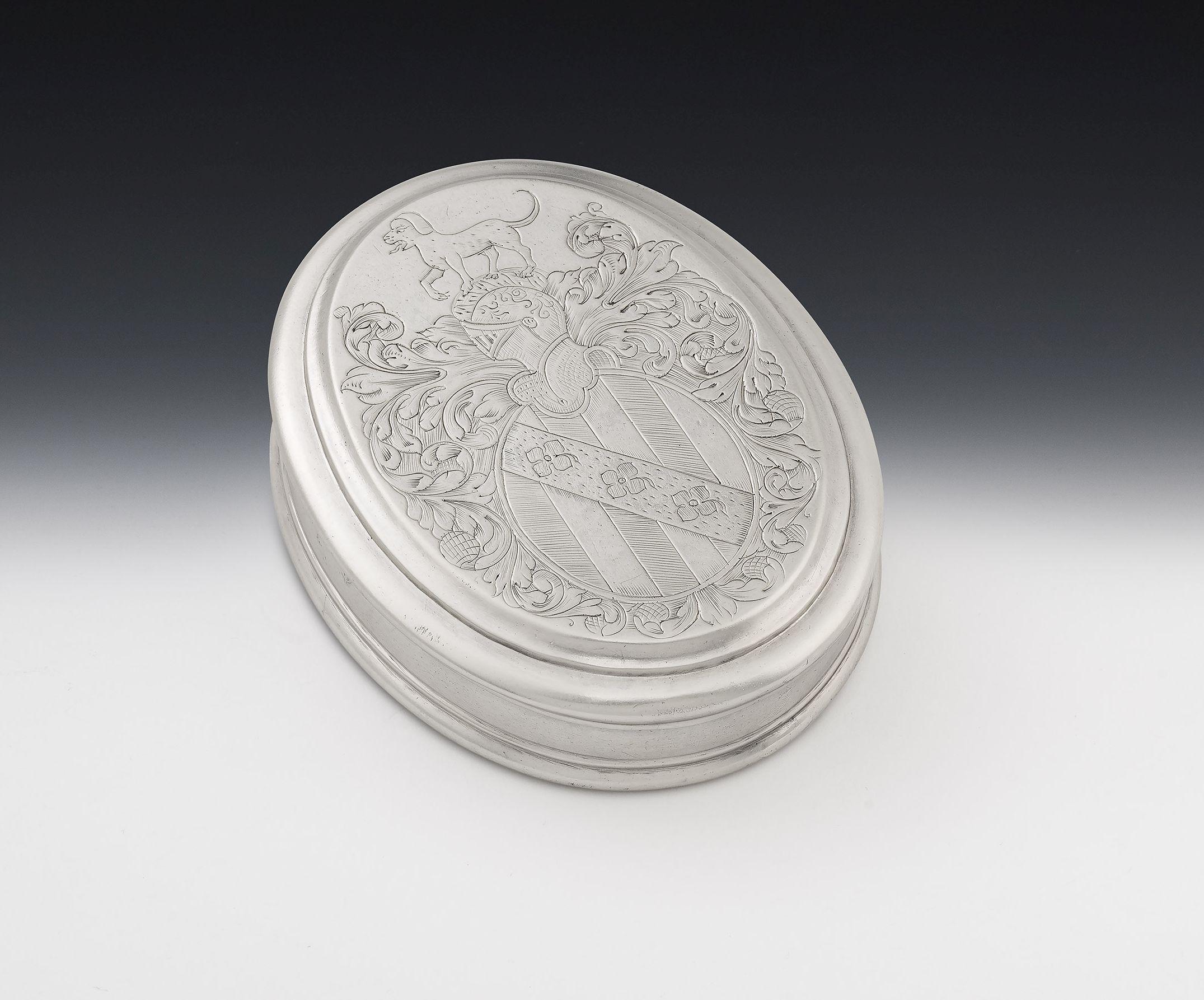 The Box is of typical oval form with a reeded edge on the base. This example has a pull-off cover displaying some of the finest engraving which we have seen on a box of this date. The cover displays a contemporary Armorial, with Crest above, issuing from a Head in Armour. The Arms and Crest are surrounded by a beautifully executed cartouche of foliate mantling and shells. The box is in quite excellent condition and is fully marked on the side of the base and with the maker's mark and sterling mark on the cover. The box has a very good colour and crisp engraving. Edward Cornock was a quality silversmith who specialised in the production of such boxes. He was apprentice to Henry Grant until 1708, when his first mark was entered. He had workshops in Carey Lane, when this box was made. Due to its rarity and quality, this box was contained within the World famous "Lion Collection" of British Silver Boxes 1640-1840. It is illustrated on page 92, of the catalogue of the collection.

The Arms and Crest are those of the Sanderson family of Little Addington and Moulton in the County of Northamptonshire.  This family was a collateral branch of the Sandersons, Viscounts Castleton who ultimately descended from Robert de Bedic, of Bedic in the County of Durham, living in the 11th century, whose descendant in the sixth generation was Alexander de Bedic, living in 1333.

The basic arms of the Sanderson family was blazoned as "Paly of six argent and azure overall a bend sable".  Several distinct branches of the family charged the bend with devices to difference one branch of the family from another.  The Sandersons who eventually became the Earls of Castleton charged their bend with "three annulets or", whilst the Sandersons, of Hedleyhope and Brancepeth.  The arms as borne by the Sandersons, of Little Addington and Moulton charged their bend with "three quatrefoils or" which were granted or authorised as follows: "Having received testimony from Mr Samuel Sanderson, of the Bishopric of Durham, that John Saunderson, of Addington Parva in the county of Northampton, is a younger branch descended out of his family, I doe assign unto him the arms of that family, distinguished by quatrefoyies upon the Bend, as they be here depicted.  In witness thereof I have herewith set my hand, the 7th April 1629.  Richard St George Clarenceeaux, King of Arms.

A very fine William IV Pocket Nutmeg Grater made in Birmingham in 1836 by Joseph Willmore.

A Seal Box containing the Seal of the City of Glasgow, Glasgow, 1870.

NATHANIEL MILLS. A rare George IV Lancet Case made in Birmingham in 1827 by Nathaniel Mills.

An exceptional William IV silver gilt Toothpick Case made in London in 1832 by Benoni Stephens.

A George III Mother of Pearl and Garnet Monocular made circa 1810.

A fine George IV Snuff Box made in Birmingham in 1829 by Edward Smith.

A very rare George III Parcel Gilt and Gold Neo Classical Aide Memoire made most probably in London circa 1775. Does not contain ivory.