THE TATTON HALL KETTLE ON LAMPSTAND made in London in 1791 by Robert Sharp. 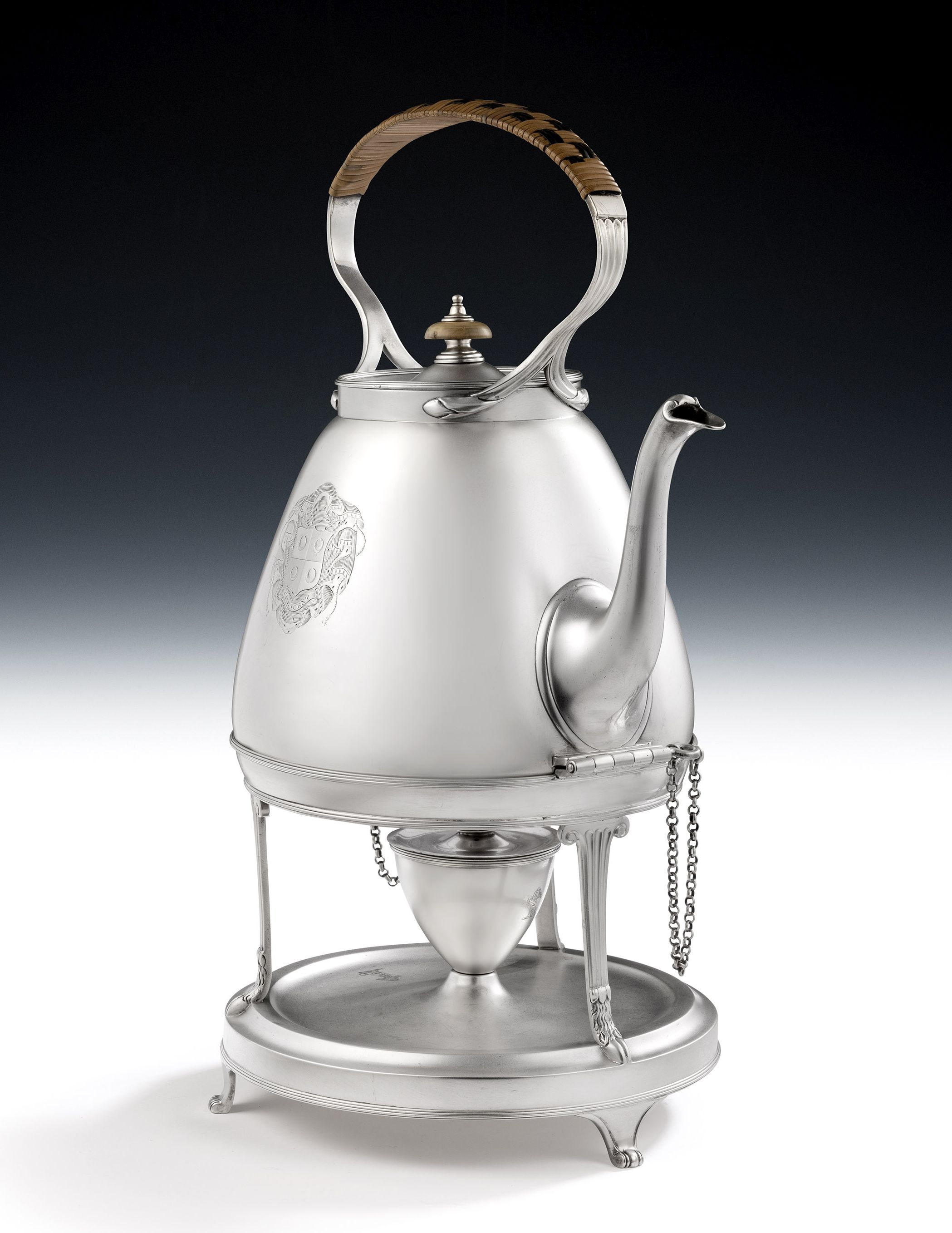 THE TATTON HALL KETTLE ON LAMPSTAND made in London in 1791 by Robert Sharp.

This very unusual piece has a circular lampstand with round platform base standing on three scroll panel feet.  The stand has a reeded frieze above, supported by three unusual Classical fluted legs with finely detailed hoof feet.  The stand displays an inverted pyramid shaped spirit burner, with pull off cover, which can be unscrewed for cleaning.  The Kettle has a very contemporary pyramid form, with cast "swan neck" spout.  The arched handle is attached to the main body with bi-furcated mouldings with leaf capping.  The handle is covered with two coloured wicker designs and the pull off cover has a reeded rim and terminates in a boxwood and silver finial.  The kettle is held in place on the stand by two side pins.  The front of the kettle is engraved with a contemporary Armorial, with the motto "CRESCENT" below.  This is all surrounded by a cartouche of drapery mantling, which was a very popular design in the 1790's.  The stand and the burner are engraved with a contemporary Crest.  The Arms Crest and Motto are those of Tatton of Wythenshaw, Cheshire, for William Tatton ( 1774-1799 ), eldest son of William Tatton (1749-1806), as his father took the name and arms of Egerton on inheriting the Egerton estates in 1780.  The Tatton family was an enourmously wealthy Cheshire landowning family, with the elder William Taton estimated to be worth "£ 20,000 a year and upwards" on his death in 1806.  The Egerton estates were centred on Tatton Hall, shown, one of the finest Neo-Classical country houses in the British Isles, now a museum owned by the National Trust.  The Drawing Room is also shown, which is where the kettle would have originally been used.

Robert Sharp was a superior maker, known for innovative designs, and exceptional quality, as shown with this piece.   He enjoyed numerous Royal and noble patrons either working alone or with Daniel Smith.  The kettle is most unusual with a contemporary feel to the design.

Diameter of the base of the lampstand: 8 inches, 20 cm.

A very fine George III Salver made in London in 1803 by Crouch & Hannam.

CHESTER. A very rare George III Skewer made by Robert Jones of Liverpool and assayed in Chester in 1798.

NEWCASTLE. A George III Sauceboat made in Newcastle in 1774 by John Langlands I.

A very fine George III Salver made in London in 1782 by Thomas Hannam & John Crouch I.

A very unusual pair of George III Neo Classical Candlesticks made in Sheffield in 1775 by John Winter & Company.

A fine William IV silver mounted Travelling Inkwell made in London in 1833 by Archibald Douglas.

A very unusual pair of George III Candlesticks made in Sheffield in 1790 by Tudor & Leader.