An exceptionally fine and rare George III Neo Classical Water/Wine Ewer made in London in 1774 by John Denziloe. 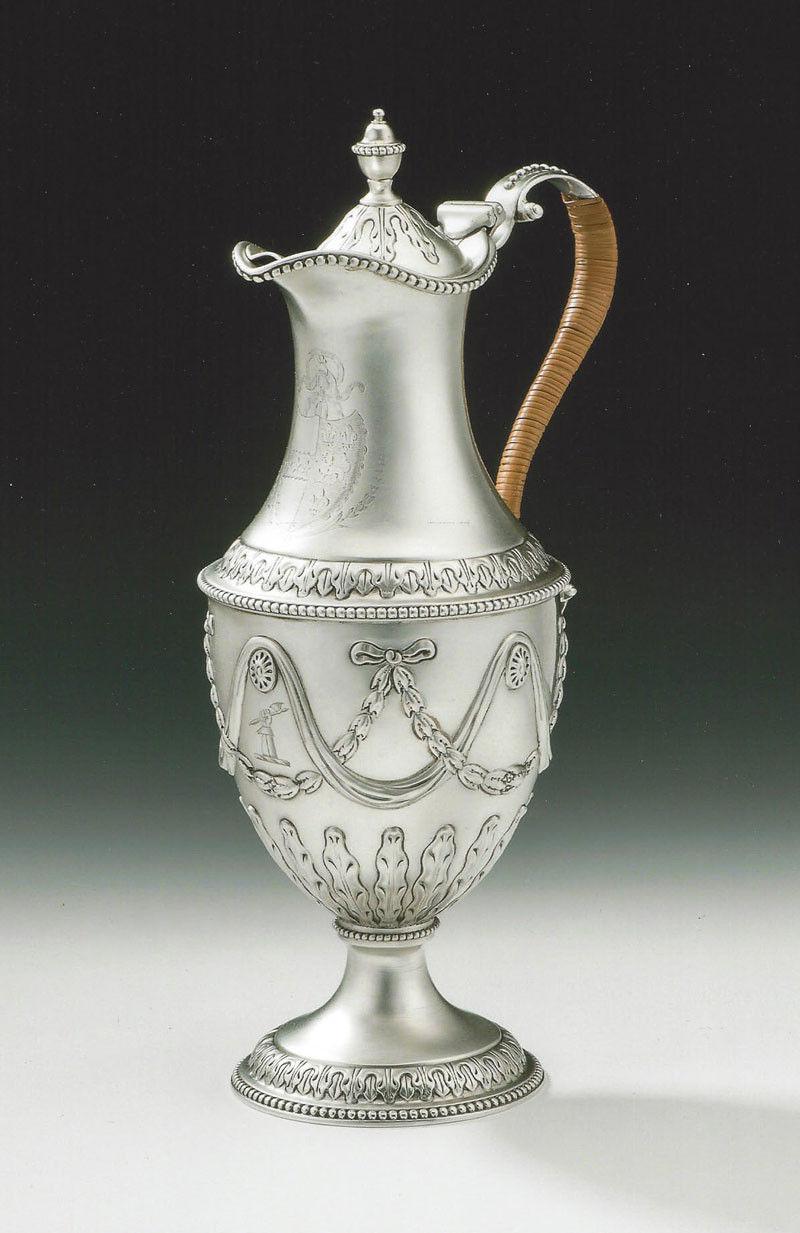 An exceptionally fine and rare George III Neo Classical Water/Wine Ewer made in London in 1774 by John Denziloe.

This beautiful Jug stands on a circular pedestal foot which is decorated with beading and an unusual band of acanthus spears. The vase shaped main body is unusually decorated with blue bell garlands, tied with ribbons, drapery swags interspersed with Classical medallions, as well as a wide band of acanthus spears. The neck is decorated with beading and acanthus foliage and the domed cover terminates in a Neo-Classical beaded finial and also displays an acanthus band. The cast scroll handle, is decorated with bold beading and is covered in wicker. The neck of the Jug is beautifully engraved with a shield shaped Coat of Arms, with crossed branches below and tied ribbons above. The main body is engraved with a contemporary Crest. This piece is in outstanding condition and is fully marked in the foot and with the Sterling Mark on the cover. The design is most unusual, which is why it was included in the Classical Ideal exhibition in London in 2010. The silversmith, John Denziloe, has a reputation for quality of design and execution. He had a long and successful career, which would account for why his sons were admitted to St Pauls School in 1802.

Our heraldic advisor conducted extensive research into the Armorial and concluded that the Arms and Crest are those of Boydell impaling North, for Josiah Boydell 1752-1817 and his wife Jane, whom he married in 1774, therefore we can conclude that this was probably a wedding present. She was the daughter of Roger North of Rougham, County Norfolk, direct descendant of Francis North, 1st Baron Guildford, who died in 1685. The Norths were a distinguished noble family with a Borony of 1554. The Guildford Barony survives as a secondary title of the present 10th Earl of Guildford.

Josiah Boydell was apprenticed to his uncle, John Boydell, 1719-1804, an engraver who ran a large business in London. John Boydell was Sheriff, Alderman and Lord Mayor of London in 1790. Josiah had been instructed in his apprenticeship in painting by Benjamin West, President of the Royal Academy, and in engraving by Richard Earlom. Most importantly, in 1774, the young Josiah was commissioned to make drawings of each of the paintings forming the great collection of Sir Robert Walpole, at Houghton Hall, Norfolk. This was prior to the Collection being sold and shipped en bloc to its purchaser, Catherine the Great of Russia, which was to form the foundations of the Hermitage. It was during this Norfolk sojourn, of 1774, that he met and married Jane North. An important and most interesting provenance.

- Most probably a wedding present for Josiah Boydell and Jane North in 1774.

- With Mary Cooke Antiques Limited May 2014.

An extremely fine pair of early George III Cast Candlesticks made in London in 1767 by William Cafe.

An extremely fine George IV Meat Dish/Serving Platter made in London in 1825 by Richard Sibley.

THE TAYMOUTH CASTLE DISHES. A very fine pair of George III ANTIQUE SILVER COVERED VEGETABLE DISHES MADE IN LONDON IN 1794 BY HENRY GREEN.

A fine pair of George III Wine Coasters made in London in 1800 by William Stroud.

A rare George III Mug made in Sheffield in 1815 by Thomas Blagden & Company.

A very unusual pair of George III Candlesticks made in Sheffield in 1790 by Tudor & Leader.

A very fine George III Sugar Basket made in London in 1785 by William Plummer.

An exceptional George III Soup Tureen made in London in 1802 by William Stroud.

A very fine & rare set of four George III Silver Gilt Dishes made in London in 1817 by Solomon Royes and John East Dix.