An exceptional pair of George II Cast Candlesticks made in London in 1739 by the rare makers Bennett Bradshaw and Robert Tyrill. 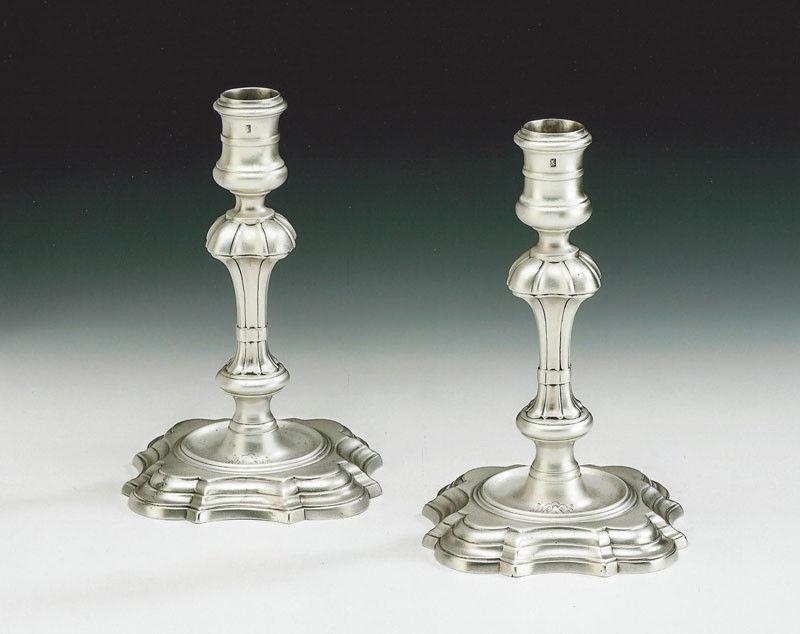 An exceptional pair of George II Cast Candlesticks made in London in 1739 by the rare makers Bennett Bradshaw and Robert Tyrill.

The Candlesticks stand on a stepped shaped base decorated with reeding which rises to a circular sunken well. The defined baluster stems are decorated with reeding and the shaft and spool shaped sockets display horizontal girdles around them. The base is engraved with a contemporary Armorial surrounded by a foliate scroll and shell cartouche, typical of the 1730s and 1740s. The Candlesticks are in excellent condition, with very crisp marks and both pieces have a good colour. Unusually, the top of the capitals, is also marked with the makers mark, along with the Sterling Mark, which is a very rare feature. Bennett Bradshaw and Robert Tyrill are extremely rare makers who were only in partnership for a very short period of time and their work is very rare. This is the first time we have seen a piece by this partnership.

With regard to the Armorial, our research has uncovered a most interesting provenance. The Arms are those of the Crisp family, Baronets of Hammersmith, London, created 1665. The first Baronet, Sir Nicholas, 1599-1666, was a vastly wealthy London merchant and eminent Royalist. He was sometime MP for Winchelsea and raised and commanded a regiment of horse, at his own expense, during the Civil War. All his property was sequested by Parliament in 1645, whereupon he fled to France.

At the Restoration, much of his property was restored and in the short time left to him he again accumulated a very large fortune, being high in Royal favour was an advantage ! Besides estates in Oxfordshire, Sir Nicholas built a magnificent house in Hammersmith which his heirs sold to Prince Rupert in 1683. It was subsequently the residence of the Margrave of Brandenburg-Anspatch from 1792 and then of Caroline, Queen Consort of King George IV.

The Arms are specifically those of a Lady in her own right, as they are contained within a diamond shaped lozenge and are those of Mary Theresa Crisp, only daughter of Sir John, the third Baronet. In 1731, she married the Reverend John Stonehouse, however she always used Crisp as her surname. She died in 1751, leaving no issue, and is buried in the graveyard of the Moravian Church in Chelsea. Although the Church was destroyed during the Blitz, the graveyard remains.

A George II Sauceboat made in London by Philips Garden in 1744.

An extremely rare Charles II Confit Box made, most probably, in London circa 1670, maker's mark of M with a crown above

A very fine George II Sparrow Beak Cream Jug made in London in 1742 by Richard Bayley.

A fine George III Mug made in London in 1734 by Thomas Farren.

A very fine pair of George II Half Pint Mugs made in London in 1754 by Thomas Whipham.

A fine George I Britannia Standard Saucepan made in London in 1720 by William Fleming.